The 2009–10 CWHL season was the third season in the history of the Canadian Women's Hockey League. 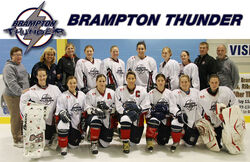