Atlanta had originally been scheduled to host what would have been the 55th NHL All-Star Game in 2005, however that game was canceled due to the NHL Lockout of 2004–05.

Players in this game, like the 55th National Hockey League All-Star Game, wore Rbk EDGE jerseys. The jersey logos had been redesigned, showing a simple logo that displays East and West on the respective conference jerseys, captain and alternate captain patches on the right side (instead of left), and the player's number below the logo.

As Atlanta is a place of significance to the Civil Rights Movement (among the hockey-related achievements is John Paris Jr. becoming the first black person to coach a pro hockey team, the Atlanta Knights of the International Hockey League), and 2008 is the 50th anniversary of Willie O'Ree breaking hockey's color barrier with the Boston Bruins, the NHL chose the All-Star weekend to honour the diversity of the league. 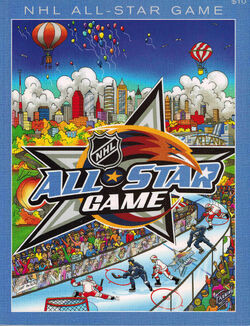 Changes in the All-Star program

For this year, to raise interest in all-star festivities, no YoungStars goaltenders were named - instead, the YoungStars played in a three-on-three game (of two running six-minute periods) halfway through the skills competition, with the regular all-star goaltenders in net. There was only one faceoff at the start of each half - if the puck goes out of play, another puck was thrown onto the ice. If a goal was scored, the three players retreated to their own side of centre ice before being able to attack again. For either side to win the YoungStars game, the team must score greater goals in both halves. Brandon Dubinsky of the New York Rangers was named the Youngstars MVP for scoring 2 goals and an assist.

Furthermore, the skills competition itself was changed dramatically - the Fastest Skater competition is now a sprint instead of a lap around the arena (a final showdown portion has also been added), while the traditional Puck Control Relay was changed to the Obstacle Course event, where stick handling, saucer passes, one-timers, and goaltenders attempting to score by shooting pucks the length of the ice into an empty net (itself a former All-Star Skills event called Goalie Goals) is featured. Both changes were made to further reflect game conditions. The traditional Shooting Accuracy remains, though a final showdown stage (consisting of having to shoot four targets in nine seconds with only four pucks, and if still tied, one shot in three seconds at one target) is held to determine an individual winner. Hardest Shot is the only event unchanged from previous years.

But by far the greatest change is in the shootout portion: two events are based on the shootout: in the Elimination Shootout, skaters shoot against the all-star goaltenders, with a skater being eliminated if they fail to score. The second shootout-based event, the Breakaway Challenge, incorporates elements from the National Basketball Association's All-Star Slam Dunk Contest: three players from each team (as selected by the all-star team captains) will be judged on their style and creativity by a panel of four judges as they attempt to score on a non-NHL goaltender. The judges may award up to nine points, and a bonus point is added should the skater score. The judging panel this year consists of Dominique Wilkins, a former two-time Slam Dunk Champion with the Atlanta Hawks, former Thrashers captain Scott Mellanby, Canadian actor Taylor Kitsch, and broadcaster Bill Clement. The two skaters (one from each team) with the highest scores face off in a final showdown to determine the winner of the event.