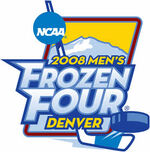 The 2008 Frozen Four was held April 10-12, 2008 in Denver, Colorado at the Pepsi Center. The state of Colorado was host to the first ten Frozen Fours, and 12 of the first 17, but had not hosted one since Denver was the host in 1976. The University of Denver hosted with the Metro Denver Sports Commission.

This was Michigan's 23rd Frozen Four, an NCAA record.

North Dakota and Boston College faced each other in the semifinal round for the third straight year.

Notre Dame became the first #4 seed to advance to the Frozen Four since the advent of the 16-team format in 2003.

The four regional champions played on April 10 in the semifinal round.

For the third straight year, one of the semifinals featured Boston College and North Dakota. Boston College won the two previous Frozen Four matchups, but lost in the final both times. They held to form this year, beating North Dakota yet again to return to the championship game for the third consecutive year.

The second game featured CCHA conference rivals Michigan and Notre Dame, who met for the third time this season. Michigan won those previous two match-ups, 3-2 at home and 5-1 at The Palace of Auburn Hills (a "home" game for Notre Dame but held in suburban Detroit), but fell in the most important one. After the Fighting Irish jumped out to a 3-0 lead, chasing goalie Billy Sauer, the Wolverines stormed back, but Notre Dame got the game-winner at 5:44 of overtime.

On April 12, the semifinal winners played in the NCAA Championship Game. Boston College made its third straight appearance in the final, looking for its first win in that span. Notre Dame, having never made it to the Frozen Four before, tried to cap its run of three straight upsets with another.

Nathan Gerbe scored twice in the second period for the Eagles, followed by a third BC goal from Joe Whitney on a feed from Gerbe. Notre Dame responded less than a minute later to make it 3-1. An apparent Irish goal in the third that would have made it 3-2 was disallowed as being kicked in by Kyle Lawson. The Eagles took advantage of the Irish letdown just 35 seconds later as Ben Smith took yet another feed from Gerbe to make it 4-1 and put the game away.

Boston College wins its third national championship, its second in the 2000s.

Nathan Gerbe is the Tournament Most Outstanding Player. 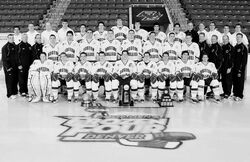 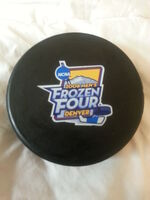