This is the 2008 Dudley Hewitt Cup, hosted by Newmarket, Ontario, Canada. The winner moved on to the 2008 Royal Bank Cup.

Please note: the Semi-final was determined in overtime.

Oakville Blades move on to the 2008 Royal Bank Cup. 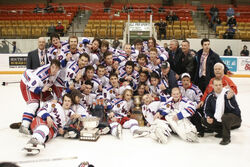 Oakville Blades
Add a photo to this gallery
Retrieved from "https://icehockey.fandom.com/wiki/2008_Dudley_Hewitt_Cup?oldid=251440"
Community content is available under CC-BY-SA unless otherwise noted.