The 2008 AIHL season is the 9th season of the Australian Ice Hockey League, the 7th in which the Goodall Cup will be awarded to the league champions.

The season opened 19 April 2008 with games in Newcastle, Adelaide and Penrith.

The one significant change in regards to the teams for 2008 is that the Brisbane Blue Tongues have relocated and are now the Gold Coast Blue Tongues, based in the Surfers Paradise city area, about 1 hours drive South of Brisbane.

Following the event, the Central Coast Rhinos forfeited their first game (a victory) to the Gold Coast Blue Tongues after icing uncleared imports.

On June 17, financial difficulties forced the Adelaide Avalanche to withdraw from the remainder of the 2008 season, leading to the cancellation of its June 21 and 22 games in Canberra and Penrith. Following negotiations, the Thebarton Ice Arena was one week later given a license for a new Adelaide team, the Adelaide A's, to fulfil the Avalanche's remaining commitments for the season, and inheriting their 2008 season results. Two games (for single points against the Bears and for double points against Canberra) were forfeited during the weekend immediately following the Avalanche's withdrawal.

The Bears won the V.I.P. Cup after finishing atop the ladder in the regular season.

The 2008 AIHL finals were played at the Hunter Ice Skating Stadium in Newcastle. The rink was significantly upgraded for the 2008 IIHF World Championship Division II in April 2008, featuring glass barriers all around the boards, along with new lighting, scoreboards and expanded seating. The other influential factor was the success both administrative and financial of the previous Finals Series in 2005 at the same rink.

In the first semi-final, the Newcastle North Stars defeated the Bears 7-5. The second semi-final was won by the Western Sydney Ice Dogs, who scored 30sec into overtime to beat the Melbourne Ice 2-1, after a thrilling game exhibiting excellent goaltending from both teams.

Newcastle proved too strong for the Ice Dogs in the championship game, winning the game 4-1. AIHL leading scorer and finals MVP Mickey Gilchrist capitalising on several turnovers to score a natural hat-trick, and the Newcastle defense was strong enough to limit the Ice Dogs' scoring chances.

Melbourne Ice alternate captain Lliam Webster was awarded the AIHL MVP award for 2008. Webster was the third-highest scoring Australian player for the season, and seventh overall, scoring 24 goals and 46 points in 21 games. This marked the second time in the award's two-year history that a Melbourne Ice player won the MVP award, but the first time for Webster. 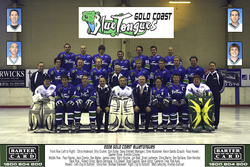 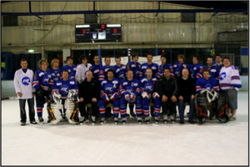 Retrieved from "https://icehockey.fandom.com/wiki/2008_AIHL_season?oldid=277455"
Community content is available under CC-BY-SA unless otherwise noted.