For 2007, the tournament round-robin format was changed from previous years, to resemble more closely the format used in the National Hockey League. Teams would receive three points for a win in regulation, while teams winning in overtime would receive two points. Teams losing in overtime would receive one point. During the round-robin portion of the tournament, a five-minute four-on-four sudden-victory overtime would be played, while the knockout games and the gold medal game would use full-strength ten- and twenty-minute sudden-victory overtimes, respectively. If the game remained tied after overtime, an NHL-style shootout (with three skaters instead of five, as per other international competitions) would be held.

Belarus from the Preliminary Round (both on Dec 27th, 2006) are included as well since these results carry forward

The following teams took part in the Division I tournament, that was held from December 11, 2006 through December 17, 2006. Group A was played at Odense, Denmark. Group B was played at Torre Pellice, Italy:

Denmark is promoted to Pool A and

Kazakhstan is promoted to Pool A and

Hungary is promoted to Division I and

Serbia has been entered in place of

Lithuania is promoted to Division I and 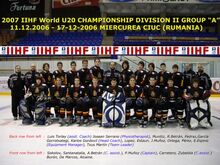 The following teams took part in the Division III tournament, which was played at the Ankara Ice Palace in Ankara, Turkey from January 8, 2007 through January 14, 2007: