Ice hockey was featured as part of the 2007 Asian Winter Games at the Changchun Fuao Ice Hockey Rink for the Men's and at the Jilin Provincial Skating Rink for the Women's in Changchun. Events were held from 26 January to 3 February 2007.

According to the IIHF World Ranking, Kazakhstan (ranked 11th) were the highest rated team in men's ice hockey, followed by Japan (21st) and China (28th). In the women's World Ranking, China were rated 7th, Kazakhstan 9th and Japan 10th, with North Korea also in the top 20.

Kazakhstan were the only team in the group to be rated by the IIHF, and went through with comfortable wins in both matches.

As in Group B, two of the teams did not appear on the IIHF World Rankings, nor have they participated in ice hockey's world championships.

Neither Malaysia nor Hong Kong have participated in ice hockey world championships before; South Korea are in Division II after a 3–6 loss to China in last year's World Championship series.

The four top-ranked teams reached the finals round; North Korea, who lost 1–5 to South Korea and 2–14 to China in the 2006 Division II World Championships, were eliminated by Japan.

Games were played as a round robin.

The women's competition was held as a single round robin. China and Kazakhstan played in the 2005 World Championships, finishing sixth and seventh respectively, but failed to qualify for the 2006 Olympic tournament. Japan finished as runner-up to Switzerland in Division I of the 2005 tournament, while North Korea played in Division II and South Korea in Division IV. 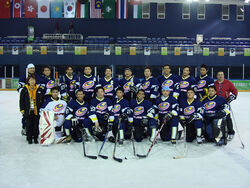