The 2007 AIHL season was the 8th season of the Australian Ice Hockey League, the 6th in which the Goodall Cup will be awarded to the league champions.

The season opened on 14 April 2007 with the traditional double-header between the Melbourne Ice and the Adelaide Avalanche. Melbourne won both games, 6-1 on Saturday and 5-4 on Sunday, to sweep the opening series for the first time in team history.

Adelaide and Melbourne were most evenly placed throughout the season to claim the top position, Adelaide eventually moving past the Ice in the final round to claim the V.I.P. Cup. Newcastle and the Bears had opened up a substantial gap between themselves and fifth position; Brisbane, with double points wins on the road in Adelaide and Melbourne, got themselves into a position to steal fourth place from the Bears, but lost its final game 6-7 to the Knights.

The playoffs were held at the Penrith Ice Palace, the Bears' home ice, on September 1-2. The Bears beat the Avalanche in their semi-final by the score of 4-1, and Newcastle eliminated the Ice in a semi-final for the second straight year, this time winning 3-6.

The championship game was held on September 2, 2007 between the Bears and Northstars. Other than an early scoreless powerplay dominated by the Bears, the first period was even and tentative, with the score 0-0 at the first intermission. A faster second period saw the Bears take some ascendency, and they eventually scored through Vladimir Rubes at 11:26. They opened up a 2-0 lead through Warren Jayawardene at 6:12 in the third period, but AIHL leading scorer Brad Wanchulak narrowed the margin back to 2-1 only 39 seconds later. From that point, the game shifted Newcastle's way, with the Northstars doing all of the attacking, and the Bears looking increasingly shaky under the sustained pressure. The Bears' Murray Wand was penalised for holding the stick with 2:59 remaining, and Newcastle eventually tied the game with a power play goal to Darcy Corcoran with 1:45 remaining. Wand took another penalty with 1:28 remaining, but the Northstars did not score and the game went to overtime. After 5½ minutes of overtime, Northstars' goaltender Matt Ezzy was penalised for hooking; on that powerplay, the Bears scored the game-winner through a blue-line shot from Rob Pashminka.

The Bears won their first Goodall Cup since 2002. Bears' goaltender Pekka Kankaanranta won the Playoffs' MVP award, for his return of 28 saves against Adelaide and 15 saves against Newcastle.

The inaugural MVP award was presented to Tommy Powell of the Melbourne Ice. While Powell ranked only tenth amongst scorers (23 games, 16 goals, 18 assists), he dominated Melbourne's attack during the first half of the season, when they were at their most successful. 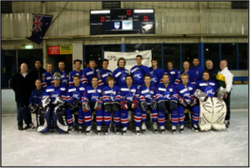 Retrieved from "https://icehockey.fandom.com/wiki/2007_AIHL_season?oldid=277429"
Community content is available under CC-BY-SA unless otherwise noted.