Two teams suspended operations at the end of the 2006-07 season, the Long Beach Ice Dogs and the Toledo Storm. Toledo's suspension was granted after the Triple-A baseball franchise Toledo Mud Hens acquired the Storm and requested a suspension of the team for two years in order to allow a new arena to be built in downtown Toledo to open in 2009, when the team returns to play.

The league officially welcomed back the Mississippi Sea Wolves, who had to suspend operations for two seasons (2005-07) because of damage to the Mississippi Coast Coliseum caused by Hurricane Katrina.[1] The Elmira Jackals also joined the ECHL after being in the United Hockey League for their previous existence.[2] Another established team, the Trenton, New Jersey franchise, will enter its ninth season with a new name. The team, now owned by the NHL New Jersey Devils, will adopt the Devils nickname, which is now standard across the team's farm system.[3]

Before the start of the season, the league announced that it would hand out a new award to honor on-ice referees for their dedication and contribution to the league, through the Ryan Birmingham Memorial Award. The award is given in honor of Ryan Birmingham a former ECHL referee who died in an automobile accident, while driving from Chattanooga, Tennessee to Snellville, Georgia in May 2007. Birmingham died at the age of 24.[4][5]

The Cincinnati Cyclones finished first overall in the regular season winning the Brabham Cup, and became the third team in ECHL history to win the Brabham Cup and Kelly Cup in the same year by defeating the Las Vegas Wranglers four games to two.

The ECHL announced the alignment of the 25 teams of the ECHL.

The ECHL realigned the playoff format for the two conferences.

The top eight teams will advance to the playoffs, with the two division champions being the first and second seeds. The other six teams will be seeded by points. Teams will not be re-seeded. All games are best of seven games.

In the South Division,the top eight teams will advance to the playoffs, with the division champion being the first seed. The other teams will be seeded by points. Teams will be re-seeded according to the same criteria with division leader seeded first and remaining teams seeded in order of regular-season points. All games are best of five games. The winner of the Division Finals will advance to the American Conference Finals.

The Kelly Cup Finals will be a best-of-seven series between the two conference champions.

The 16th ECHL All-Star Game was played on January 23, 2008 at Stockton Arena in Stockton, California. The hosting National Conference defeated the American Conference 10–7, as well as winning the Skills Competition, 26–25. Ash Goldie of the Victoria Salmon Kings was named the All-Star Game MVP after scoring three goals and three assists including netting the game winning goal early in the third period. 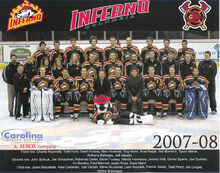