The defending league champions were the Coventry Blaze, who were also the holders of the Challenge Cup. The Nottingham Panthers looked to defend the Play Off Championship they won for the first time in eighteen years in 2007.

The season began on September 5, 2007 with a "Charity Shield" style game between the 2006–07 league champions and Challenge Cup winning Coventry Blaze and the playoff champions Nottingham Panthers at the National Ice Centre.[1] The Panthers defeated the Blaze 7-6 to win the inaugural event.

For the preliminary round, teams were divided into two groups of five with teams playing each of their opponents once with two homes games and two away games. The home and away games for each club were determined by a random draw.[2] The top two in each group advanced to the semi finals of the competition.

Winner A (Nottingham) vs Runner Up B (Newcastle)[edit | edit source]

Winner B (Sheffield) vs Runner Up A (Cardiff)[edit | edit source] 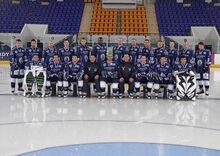 Coventry Blaze
Add a photo to this gallery

Retrieved from "https://icehockey.fandom.com/wiki/2007–08_EIHL_season?oldid=282583"
Community content is available under CC-BY-SA unless otherwise noted.