The 2006 World Junior Ice Hockey Championships (2006 WJHC) were held in Vancouver, Kelowna, and Kamloops, British Columbia, Canada. The championships began on December 26, 2005, and finished on January 5, 2006. Games were played at GM Place and the Pacific Coliseum in Vancouver, the Interior Savings Centre in Kamloops and Prospera Place in Kelowna. Team Canada was the winner defeating Russia 5–0 in the gold medal game. Total attendance was 325,138 (a new record) spread over 31 games, for an average of 10,488 per game.

Norway from the preliminary round (both on December 27, 2005) are included as well since these results carry forward.

Selected by the media.

Selected by the directorate. 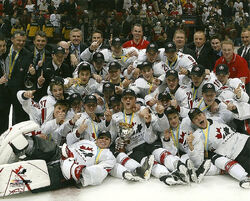 Retrieved from "https://icehockey.fandom.com/wiki/2006_World_Junior_Ice_Hockey_Championships?oldid=348644"
Community content is available under CC-BY-SA unless otherwise noted.