The 2006 AIHL season was the 7th season of the Australian Ice Hockey League, the 5th in which the Goodall Cup was awarded to the league champions.

The Melbourne Ice mathematically clinched their first ever V.I.P. Cup as first place finishers on August 5 with a 5-3 win over Central Coast.

The Newcastle North Stars won their third AIHL championship in four years by defeating the Adelaide Avalanche 4-0 in the final on September 3. 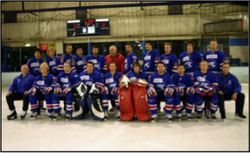 Retrieved from "https://icehockey.fandom.com/wiki/2006_AIHL_season?oldid=277432"
Community content is available under CC-BY-SA unless otherwise noted.