The 2006-07 ECHL Season was the 19th season of the ECHL. Two teams returned to the ECHL after suspensions: the Texas Wildcatters (who had to suspend operations for the 2005-06 season as a byproduct of damage to their home arena caused by Hurricane Rita) and the Cincinnati Cyclones (who had ceased operations after the 2003-04 season. As a result of the failure of the AHL to return to the area, owners decided to restart their franchise in the ECHL).

The ECHL Board of Governors announced in the June 2006 meetings that the league revoked the Greenville Grrrowl franchise, and the San Diego Gulls had returned its franchise. The league had 25 teams for 2006-07.

At the 2006 pre-season meeting of the ECHL Board of Governors, the ECHL announced the alignment of the 25 teams of the ECHL.

The ECHL realigned the playoff format for the two conferences.

The ECHL will use a straight-up, eight team knockout format for the National Conference.

The top eight teams will advance to the playoffs, with the two division champions being the first and second seeds. The other six teams will be seeded by points.

In the second round, the best team remaining from each division is seeded first and second, and the other two teams are seeded by points.

The better team gains home-ice advantage for the conference finals.

All games are best of seven games.

The winners of the two division finals play in a best-of-seven conference final.

The Kelly Cup Finals will be a best-of-seven series between the two conference champions. 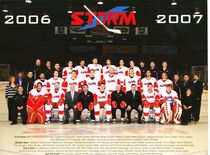