The 2006–07 WHL season was the 41st season for the Western Hockey League. Twenty-one teams completed a 72 game season. The Everett Silvertips won the Scotty Munro Memorial Trophy, after having the best record in the WHL during the regular season. The Medicine Hat Tigers won the President's Cup, defeating the Vancouver Giants in seven games. The Giants captured the 2007 Memorial Cup as tournament hosts, defeating the Tigers in the championship game.

The Tigers earned a spot in the Championship game with a 2–1 round robin record, falling 3–1 to the Maineiacs before defeating the Whalers 4–1, and the Giants 1–0.

The Giants also finished 2–1, defeating Plymouth 4–3 in Overtime and Lewiston 2–1. Their loss to Medicine Hat dropped them into a semi-final game.

The Giants prevailed in the semi-final to meet the Tigers in the Cup Final, and defeated Medicine Hat 3–1 to take the title.

On November 29, the WHL defeated the Russian Selects 5–3 before a crowd of 4,404 at Chilliwack, British Columbia.

On November 30, the WHL defeated the Russian Selects 8–1 before a crowd of 4,136 at Kamloops, British Columbia.

The 2007 WHL Bantam Draft was the 18th Bantam Draft. It was hosted by the Stampede Park Round-Up Centre on Thursday May 3rd, 2007, via the internet.

List of first round picks in the bantam draft. 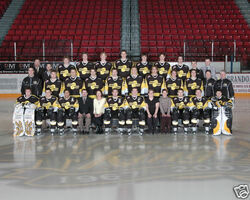 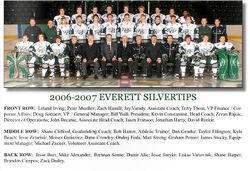 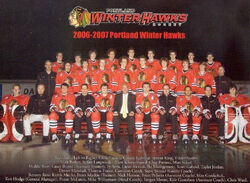 Portland Winterhawks
Add a photo to this gallery

Retrieved from "https://icehockey.fandom.com/wiki/2006%E2%80%9307_WHL_season?oldid=410238"
Community content is available under CC-BY-SA unless otherwise noted.