The 2005 World Junior (Under 20) Ice Hockey Championships (2005 WJHC) was held between December 25, 2004, and January 4, 2005, at the Ralph Engelstad Arena in Grand Forks, North Dakota, and at the Ralph Engelstad Arena in Thief River Falls, Minnesota, United States. Canada was the winner. North American teams, and to a lesser extent some European teams as well, greatly benefited from the 2004–05 NHL lockout. Several players who would have otherwise been playing professional hockey in the National Hockey League (and thus unable to participate in the Championships), were able to participate in the tournament. As a likely result, some games ended with some of the most lop-sided scores in the tournament's history.

Germany from the preliminary round are included as well since these results carry forward.

Belarus are relegated to Division I for the 2006 World Junior Ice Hockey Championships.

The Division I Championships were held December 13-December 19, 2004, in Sheffield, United Kingdom (Group A), and in Narva, Estonia (Group B).

Norway and Latvia advance to the 2006 World Junior Ice Hockey Championships while the United Kingdom and Estonia are relegated to Division II. 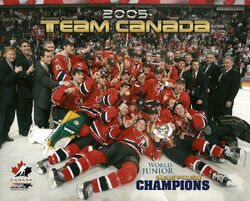 Retrieved from "https://icehockey.fandom.com/wiki/2005_World_Junior_Ice_Hockey_Championships?oldid=348642"
Community content is available under CC-BY-SA unless otherwise noted.