The 2005 Men's Ice Hockey Championships was held in May 2005 in Vienna and Innsbruck, Austria. It was the 69th annual event, and was run by the International Ice Hockey Federation (IIHF).

Sixteen participating teams were placed in the following four groups. After playing a round-robin, the top three teams in each group advanced to the qualifying round. The last team in each group competed in the relegation round.

The consolation round is composed of the four teams that placed last in Groups A through D. They play in a round-robin fashion, and the bottom two teams get relegated to the Division I group in next year's World Championships.

The final standings of the tournament according to IIHF:

List shows the top skaters sorted by points, then goals. If the list exceeds 10 skaters because of a tie in points, all of the tied skaters are left out.

Only the top five goaltenders, based on save percentage, who have played 40% of their team's minutes are included in this list. 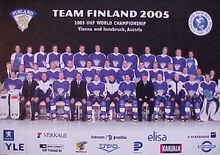