The 2005 Memorial Cup was held May 21-29, 2005 at the John Labatt Centre in London, Ontario. The Cup tournament featured the champions from the Western Hockey League, the Kelowna Rockets, the Quebec Major Junior Hockey League, the Rimouski Océanic, the Ottawa 67's representing the Ontario Hockey League, and the host team. Since the host team, the London Knights, won the Ontario Hockey League championship against the Ottawa 67's, the 67's earned the right to represent the OHL as the runner-up. The Knights had never won the Memorial Cup, unlike the other three teams, despite having a franchise for longer than any of the other three teams (40 seasons). 2005 marked both London's first ever OHL championship and first Memorial Cup victory in its 40 year history.

Media attention was unusually high, with the television ratings the highest ever recorded for the tournament [1]. There were several reasons for this increase in media attention: 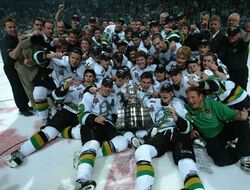 The road to the cup