For the first time in Frozen Four history, every team in the tournament was from the same conference. These four teams had previously met in the 2005 WCHA Semifinals.

Denver defeated North Dakota 4-1 in the championship game to win their second straight National Championship, their seventh overall, and the fifth title in six years won by a WCHA team.

The four regional champions played on April 7th in the semifinal round of the NCAA Tournament.

The first game featured intrastate rivals Colorado College and Denver, who met for the sixth time in the 2004-05 season, a rematch of the WCHA Championship Game. Denver led the series 3-2 coming into the game.

The Pioneers jumped out to a 2-0 lead midway through the first period with two power-play markers by Luke Fulghum about a minute and a half apart, and Matt Carle would make it 3-0 on the power play early in the second. Brian Salcido scored for Colorado College midway through the second to bring the Tigers back within two, but Gabe Gauthier's power play goals with 10 seconds left in the second and early in the third period created a 5-1 Pioneer lead, and Denver would go on to win 6-2. All eight goals in the game were scored on the power play.

Minnesota and North Dakota met for the fourth time on the season in the second semifinal game, a rematch of the WCHA Consolation Game. Erik Fabian scored early in the first period on a stolen puck, and midway through the second period at even-strength to give North Dakota a 2-0 lead after two periods. Freshman Travis Zajac would then score twice in the first five minutes of the third period, the first on the power play and the second shorthanded, to put the Sioux up 4-0. Minnesota would answer back with 2 quick power play goals, but the play of Sioux netminder Jordan Parise propelled North Dakota to the 4-2 victory and a spot in the National Championship game.

On April 9, the semifinal winners, Denver and North Dakota, played in the NCAA Championship Game. It was the fourth time the two teams had met with the National Championship on the line - the teams also faced off in the final game in 1958, 1963, and 1968. This tied the Denver-North Dakota matchup with Michigan-Colorado College for most title games. The two teams had met three times previously, most recently in the WCHA Semifinals.

Jeff Drummond opened the scoring at 6:15 in the first period, playing a favorable bounce from Kevin Ulanski past Sioux goaltender Jordan Parise into the net. Travis Zajac would score on the power play about four minutes later to tie the game at one, beating freshman goaltender Peter Mannino, the netminder's only error of the night. Midway through the second, another bounce from Ulanski would find freshman Paul Stastny, who scored on the power play to put the Pioneers back up on top. Stastny would score a second power play goal in the third period, and an empty netter from the lone goalscorer of the 2004 title game, Gabe Gauthier, sealed Denver's second straight National Championship victory. North Dakota peppered Mannino with shots throughout the game, landing 45 shots on goal in sixty minutes, but only finding the back of the net once. For his 44-save effort in the title game, along with his three victories in the NCAA Tournament, Mannino was named the tournament's Most Outstanding Player. 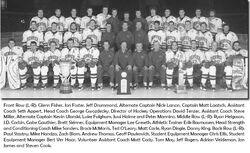 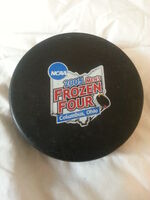