The 2005 Calder Cup Playoffs of the American Hockey League began on April 19, 2005. The sixteen teams that qualified, eight from each conference, played best-of-7 series for division semifinals, finals and conference finals. The conference champions played a best-of-7 series for the Calder Cup. The Calder Cup Final ended on June 10, 2005 with the Philadelphia Phantoms defeating the Chicago Wolves four games to none to win the second Calder Cup in team history. Philadelphia's Antero Nittymaki won the Jack A. Butterfield Trophy as playoff MVP.

In each round the higher seed receives home ice advantage, meaning they can play a maximum of four home games if the series reaches seven games. There is no set series format for each series due to arena scheduling conflicts and travel considerations.

Note 1: All times are in Eastern Time Zone (UTC-4).
Note 2: Game times in italics signify games to be played only if necessary.
Note 3: Home team is listed first.

(A1) Manchester Monarchs vs. (A4) Providence Bruins

(A2) Hartford Wolf Pack vs. (A3) Lowell Lock Monsters

(A3) Lowell Lock Monsters vs. (A4) Providence Bruins 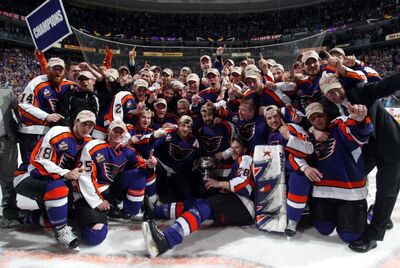