The 2005–06 Deutsche Eishockey Liga season was the 12th season since the founding of the Deutsche Eishockey Liga (German Ice Hockey League).The German champion Eisbären Berlin defended it's title in the final game on 17. April, 2005. The Kassel Huskies left the league after losing in the playdown against the new DEL team the Füchse Duisburg. 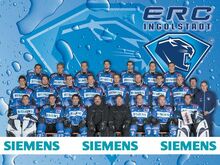 Kassel Huskies
Add a photo to this gallery

Retrieved from "https://icehockey.fandom.com/wiki/2005-06_DEL_season?oldid=295136"
Community content is available under CC-BY-SA unless otherwise noted.