The 2005–06 QMJHL season was the 37th season in the history of the Quebec Major Junior Hockey League. The Canadian Hockey League institutes the shootout loss statistic to be recorded in the regular season standings. The league inaugurates the Maurice Filion Trophy for the "General Manager of the Year."

The QMJHL continued to expand eastward, into former American Hockey League markets, by granting franchises in Saint John, New Brunswick and St. John's, Newfoundland and Labrador. The league reorganizes into a West Division, entirely made of teams from the province of Quebec, and an East Division, entirely made of teams in Atlantic Canada. Eighteen teams played 70 games each in the schedule.

Coach Ted Nolan led the Moncton Wildcats to a first overall finish in the regular season, winning their first Jean Rougeau Trophy. The Wildcats also won their first President's Cup, defeating the Quebec Remparts in the finals. Since Moncton was chosen to host the 2006 Memorial Cup tournament, the Remparts qualified for the Cup as league finalists, and won the Memorial Cup, defeating Moncton in the championship game.

Alexander Radulov was the leading scorer of the playoffs with 55 points (21 goals, 34 assists). 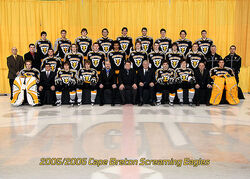 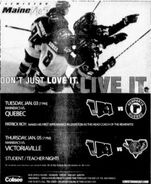