In an exciting fashion, the Denver Pioneers would win their sixth national title 1-0 over Maine.

The four regional champions played on April 8th in the semifinal round of the NCAA Tournament.

Minnesota-Duluth jumped out to a 2-0 lead after the first period and led 3-1 after two, powered by two goals from senior forward Junior Lessard. Lessard - who would go on to win the Hobey Baker Award the next day - nearly completed the hat trick late in the second period, but a save by Adam Berkhoel kept Denver in the game. The Pioneers responded with three goals in the first 8:25 of the third period to take the lead, and ultimately sealed the game with an empty net goal in the waning moments. The Pioneers got a goal - the game winner - and two assists from Lukas Dora, who played his final game in a Denver uniform, as he would be suspended from the NCAA Championship game for a violation of team rules.

The nightcap saw two teams who were very familiar with the FleetCenter play for the last spot in the title game. Maine had been there three weeks earlier, winning the Hockey East championship, but Boston College had the hometown crowd behind them. All three goals in the game would be scored on the extreme ends of the periods, with Jon Jankus striking for Maine late in the first, Ryan Shannon tallying for the Eagles early in the second, and Dustin Penner netting the game winner for the Black Bears early in the third, sending Maine to their second NCAA title game in three years. Jimmy Howard backstopped the Black Bears in net, making 40 saves to propel the team into the final.

On April 10, the semifinal winners, Denver and Maine, met in the NCAA Championship Game. 18,597 were on hand to witness a closely-played, largely defensive game that turned into an all-out melee at the end. Derek Damon appeared to have drawn first blood early on the power play, but video replay showed a skate in the crease for Maine, and the goal was disallowed. Denver's Gabe Gauthier scored what proved to be the game's lone goal at 12:26 in the first period, but perhaps the most memorable moment of the game were the last two minutes, where Denver penalties nearly changed the face of the game. With 2:09 remaining, Matt Laatsch was called for hooking, and on the ensuing penalty kill, Gauthier would be called for delay of game for throwing the puck out of the Maine attacking zone. With the two man advantage, Maine pulled goaltender Jimmy Howard, creating a 6-on-3 shooting gallery for a minute and 25 seconds. Denver stood its ground, relying on several saves by senior goaltender Adam Berkhoel and a shot off the post to fend off the Maine barrage and keep the game scoreless, sealing the Pioneers' sixth national title, their first in 34 years.

Berkhoel was named the tournament's Most Outstanding Player. The game was the lowest scoring championship in NCAA history, breaking the previous record of three set in 1985. 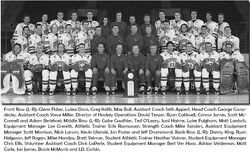 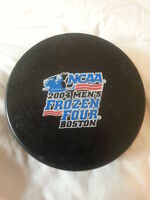