The 2004 AIHL season was the 5th season of the Australian Ice Hockey League, the 3rd in which the Goodall Cup was awarded to the league champions. 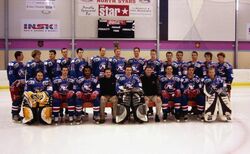 Retrieved from "https://icehockey.fandom.com/wiki/2004_AIHL_season?oldid=277450"
Community content is available under CC-BY-SA unless otherwise noted.