The 2004–05 Elitserien season was the 30th season of Elitserien. It started on September 20, 2004, with the regular season ending March 1, 2005. The playoffs of the 81st Swedish Championship ended on April 11, with Frölunda HC taking the championship. 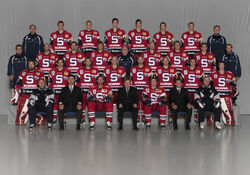 Because of the 2004–05 NHL lockout, the following NHL players played for Elitserien teams during the season.