Ice Hockey Wiki
Register
Don't have an account?
Sign In
Advertisement
in: Article with short description, ECHL seasons, 2004 in hockey, 2005 in hockey

The 2004-05 ECHL season was the 17th season of the ECHL. This season marked uncharted territory for the ECHL as they established their first Canadian franchise, the Victoria Salmon Kings.

The league also adopted a "Mason-Dixon" format, as the conferences were split on the Mason-Dixon line, with the National Conference teams being north of the famed line, and American Conference teams south of the line -- in effect, all teams in states of the Confederacy, creating a "North vs South" format.

At the end of the season the Pee Dee Pride and Louisiana IceGators franchises ceased operations, with the Florence-based Pride announcing a move to nearby Conway (in the Myrtle Beach area), awaiting completion of the new Atlantic Center Arena. The Peoria Rivermen folded when replaced by an AHL team, and the Atlantic City Boardwalk Bullies relocated to Stockton, California.

As a result of the NHL Lockout, players who would be in the AHL found themselves in the ECHL for another year, while some NHL stars found work in the ECHL, some as a way to return to their hometowns (or their wives'), and others to give back to the league which gave them a start. Scott Gomez (Alaska) chose to return home to his Anchorage roots, Curtis Brown played for his wife's hometown in San Diego, while Jeremy Stevenson, who played his first professional season as a member of the Greensboro Monarchs ten years ago, returned to the Carolinas as a member of a rival club, the South Carolina Stingrays. Stevenson's NHL teammate Shane Hnidy, who played 21 games with the former Baton Rouge Kingfish as a rookie, also rediscovered his roots, playing for the Florida Everblades. Hnidy and Stevenson would find themselves playing against each other in the second round of the Kelly Cup Playoffs. Bates Battaglia joined his younger brother Anthony on the Mississippi Sea Wolves of the ECHL for the 2004-05 season on February 21, 2005. This was the first time that he had played on the same team with his younger brother. 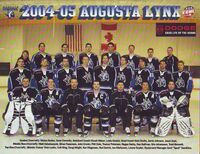 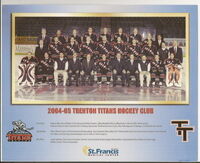