The 2004-05 Deutsche Eishockey Liga season was the 11th season since the founding of the Deutsche Eishockey Liga (German Ice Hockey League). The Eisbären Berlin (Berlin Polar Bears) became first time German Champion, a feat they will repeat a number of times in the next seasons. The Kassel Huskies was allowed to stay in the league, despite losing the play-down, as Grizzly Adams Wolfsburg lost its DEL license.

The season was significant, due to the NHL lockout. 22 NHL players came to play the season in the DEL, with the Iserlohn Roosters making the first move by signing up Mike York. Several German national team players came as well -- Marco Sturm, Jochen Hecht and Olaf Kölzig. Other significant signings included Stéphane Robidas and Doug Weight midseason signups for the previous season champion the Frankfurt Lions. Erik Cole, who would have been playing with the Carolina Hurricanes, became MVP of the playoffs with the Eisbären Berlin.

While the Kassel Huskies should have been relegated to the 2. Bundesliga but due to the Grizzly Adams losing their DEL license, they were allowed to stay. The Grizzly Adams lost the license as their new Arena was not finished in time, and the old one did not conform to the DEL rules. 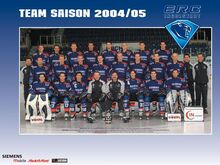