The 2004–05 AHL season was the 69th season of the American Hockey League. Twenty-eight teams played 80 games each in the schedule. The Rochester Americans finished first overall in the regular season. The Philadelphia Phantoms won the Calder Cup, defeating the Chicago Wolves in the finals.

This season featured a wealth of talent in the AHL, as the National Hockey League was in the midst of a lockout. Many players who otherwise may have been called up to be members of NHL teams for the season spent the full season in the AHL instead. The lockout also provided opportunity for several NHL arenas — including those in Anaheim, Buffalo, Nashville, San Jose, and Tampa — to host AHL games during the season. The Edmonton Road Runners, meanwhile, played the entire season in Rexall Place, normally the home of the NHL's Edmonton Oilers.

In addition, the shootout (previously used in the 1986–87 season) was reintroduced to the league, to decide a winner in games which remained tied following the overtime period. The team winning a shootout was credited with a win, and the losing team with an overtime loss. 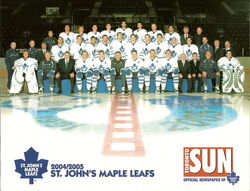 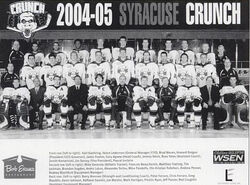 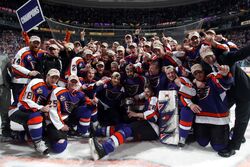 Philadelphia Phantoms
Add a photo to this gallery

Retrieved from "https://icehockey.fandom.com/wiki/2004-05_AHL_season?oldid=413606"
Community content is available under CC-BY-SA unless otherwise noted.