Germany and Belarus are relegated to Division I for the 2004 World Junior Ice Hockey Championships. 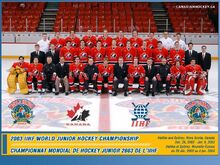 Austria and Ukraine advance to the 2004 World Junior Ice Hockey Championships, Croatia and Poland are relegated to Division II

Retrieved from "https://icehockey.fandom.com/wiki/2003_World_Junior_Ice_Hockey_Championships?oldid=646629"
Community content is available under CC-BY-SA unless otherwise noted.