Houston's Johan Holmqvist won the Jack A. Butterfield Trophy as AHL playoff MVP and also set a record for most minutes played by a goaltender in a single playoff with 1498.[3][4] Jarret Stoll of the Hamilton Bulldogs set an AHL playoff record for the fastest goal from the start of a period by scoring 4 seconds into the 3rd period on May 22, 2003 against Binghamton.[4] Hamilton's Michael Ryder ended the longest game in AHL history when he scored at 14:56 of the fourth overtime in Game 2 of the Calder Cup Final.[5]. However, this record was eclipsed during the 2008 Calder Cup Playoffs.[6]

The top 6 teams in each conference receive byes to the Conference Quarterfinals. In each round, the highest remaining seed in each conference is matched against the lowest remaining seed. In the qualification round, all games are played at the arena of the higher seed. In each round the higher seed receives home ice advantage, meaning they receive the "extra" game on home-ice if the series reaches the maximum number of games. There is no set series format for each series after the Qualification Round due to arena scheduling conflicts and travel considerations.[8]

Note 1: All times are in Eastern Time.
Note 2: Game times in italics signify games to be played only if necessary.
Note 3: Home team is listed first. 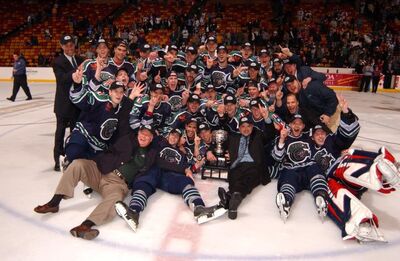