Each played just one match against each of the other teams (five for men's and four for women's). A team gained two points for a win, one point for a draw and no points for a loss. The team that gained the most points was awarded the gold medal.

Japan easily won the men's event by defeating all of the other teams and gaining ten points. Kazakhstan easily won all its games until they lost the final game to Japan, garnering a total of eight points. China took third position after beating South Korea. Thailand got fifth place and Mongolia got sixth place after losing all its games.

In women's ice hockey, Kazakhstan won all its games and the gold medal, in a league system with five teams playing. Japan won the silver medal, and China the bronze. North Korea took fourth place and South Korea was in fifth place. 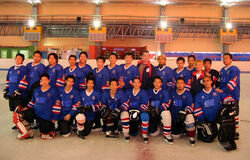