The 2003–04 Elitserien season was the 29th season of Elitserien. It started in September 2003, with the regular season ending February 2004. 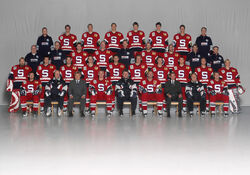