The 2003–04 QMJHL season was the 35th season in the history of the Quebec Major Junior Hockey League. The league continued to expand to new eastern markets, with teams relocating to Maine and Prince Edward Island. Conferences were abandoned and teams were divided into three divisions by geography. Sixteen teams played 70 games each in the schedule.

The Lewiston Maineiacs became the league's second American-based team in history after the Plattsburgh Pioneers, and first to survive a full season. The P.E.I. Rocket also became the first major junior hockey team based on Prince Edward Island.

Rookie Sidney Crosby led the league in scoring as a 16-year old, and won the Michel Brière Memorial Trophy as the MVP of the regular season.

The Gatineau Olympiques finished first overall in the regular season winning their fourth Jean Rougeau Trophy, and also won their sixth President's Cup, defeating the Moncton Wildcats in the finals.

The 2003–04 season was the first time the Canada-Russia challenge was played. The event, then known as the RE/MAX Canada-Russia Challenge was hosted by the Halifax Mooseheads and the Rimouski Océanic. On November 20, 2003, the Russian Selects defeated the QMJHL All-stars 3–2 at the Halifax Metro Centre. On November 24, 2003, the QMJHL All-stars defeated the Russian Selects 6–2 at Colisée de Rimouski.

Each regular season division winner received a first round bye, and ranked 1st, 2nd, and 3rd overall. Remaining teams were ranked 4th to 13th, regardless of division.

Maxime Talbot was the leading scorer of the playoffs with 27 points (11 goals, 16 assists). 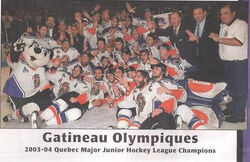