The 2003–04 AHL season was the 68th season of the American Hockey League. The league introduces the Willie Marshall Award in honour the career points leader in the AHL, and awards it to the annual top goal scorer.

The AHL changes from a six division alignment to four divisions within two conferences. The Eastern conference consists of the Atlantic and East divisions, and the Western conference consists of the North and West divisions. Twenty-eight teams played 80 games each in the schedule. The Milwaukee Admirals finished first overall in the regular season, and won the Calder Cup, defeating the Wilkes-Barre/Scranton Penguins in the finals. 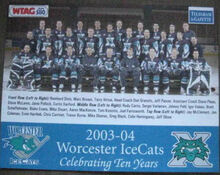