The Minnesota Golden Gophers, playing in front of a friendly hometown crowd, defeated Maine 4-3 in sudden death overtime to win their first national championship since 1979, their fourth overall. Grant Potulny scored the game winning goal in the overtime period.

This was the first Frozen Four in a decade that did not include either Boston College or Boston University. 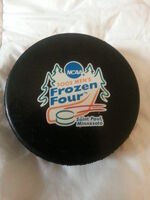