The 2001 Men's Ice Hockey Championships were held between April 28 and May 13, 2001 in Nuremberg, Cologne and Hanover, Germany.

It was the 65th annual event, and was run by the International Ice Hockey Federation (IIHF).

Far Eastern Qualification for the tournament took place between September 4 and September 6, 2000 in Sapporo, Japan.

In the qualification round, the top 4 teams from each group progressed to the Playoff Round, whilst the bottom 2 teams are eliminated.

As the Far Eastern qualifier, 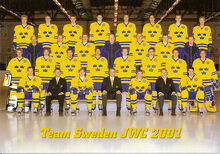