The 2001–02 AHL season was the 66th season of the American Hockey League. It was the season of the biggest growth in the AHL's history, as it accepted eight new teams. The demise of the International Hockey League brought six teams transferring from the defunct league, in addition to two expansion teams.

The AHL realigned divisions again. The Eastern conference consisted of the East, North and Canadian divisions. The Western conference consisted of the Central, South and West divisions. The league also announced three additional trophies, two of which are to be awarded for the regular season champions of the new divisions. The Norman R. "Bud" Poile Trophy goes to the West division, and the Emile Francis Trophy goes to the North division. The third trophy, the Michael Condon Memorial Award is first awarded for outstanding service by an on-ice official in the AHL.

Twenty-seven teams played 80 games each in the schedule. The Bridgeport Sound Tigers finished first overall in the regular season. The Chicago Wolves won their first Calder Cup championship, in their inaugural AHL season.

Teams from the International Hockey League 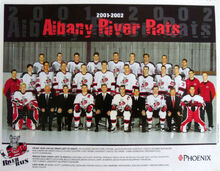