The 2000-01 ECHL season was the thirteenth season of the ECHL. Before the season, the league lost three members as the Huntington Blizzard and the Jacksonville Lizard Kings ceased operations and the powerhouse Hampton Roads Admirals moved up to the American Hockey League as the Norfolk Admirals, the league also decided to expand the regular season to 72 games. The Trenton Titans finished first overall in the regular season, and the South Carolina Stingrays won their second Kelly Cup defeating the Trenton Titans four games to one.

†-Tallahassee was penalized 15 points for salary cap violations (from 83 to 68), knocking them out of a playoff spot 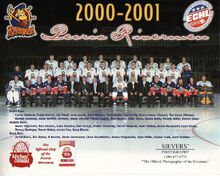 Peoria Rivermen
Add a photo to this gallery

Retrieved from "https://icehockey.fandom.com/wiki/2000-01_ECHL_season?oldid=272206"
Community content is available under CC-BY-SA unless otherwise noted.