The 2000–01 WHL season was the 35th season of the Western Hockey League. Eighteen teams completed a 72 game season. The Red Deer Rebels won the President's Cup before going on to win the Memorial Cup.

On January 31, the WHL Western All-stars were defeated by the QMJHL Dilio All-stars 7–5 at Kamloops, British Columbia before a crowd of 4,103. 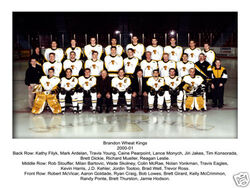