The NHL All-Star Game originated from the Players Committee and was approved on May 23, 1947. For the site of the All-Star Charity Game, it was applied for by Toronto and Chicago, with Chicago receiving the second game, in 1948. It was agreed that proceeds would be divided whereby one-third would go to Toronto charities, and two-thirds would go to the Players Emergency (Benevolent and Disability) Fund. At a later meeting in September 1947, the players agreed to set up a pension fund, with $900 from every player going into the fund and 25 cents from the sale of every playoff ticket and the two-thirds of the All-Star Game proceeds to go into the fund.

The players selected for the game attended a Toronto Argonauts-Hamilton Tiger-Cats football game on the day of the Game. That was followed by a dinner at the Royal York Hotel. The players were given miniature engraved gold pucks. There were extra gifts for the Maple Leafs, who had won the Stanley Cup the previous spring. The Leafs received gold cufflinks from the Ontario government, a free lifetime pass from Conn Smythe. Sponsors gave each player a coat, a hat, a table lighter, golf balls, a tie, cigarette boxes, pocket knives, team photos, silver tea trays, engraved gold watches and silver watch chains.

The All-Stars wore red sweaters with white stripes and white stars across the chest above the NHL shield. The referees wore dark blue sweater. The Leafs wore their white sweaters.

The game was well-contested and was physical. Ken Reardon was assessed a major penalty for cutting Bob Goldham on the head after a dirty cross-check. Reardon was involved in a stick-swinging incident between himself and Bill Ezinicki and Gus Mortson. Maurice Richard was placed on a line with Ted Lindsay. The pair, who would often fight it out in regular games did not share a word, according to Richard.

The game was marred by Bill Mosienko suffering a broken ankle in the second period, leading to a huge trade between the Chicago Blackhawks and Toronto Maple Leafs involving Max Bentley. 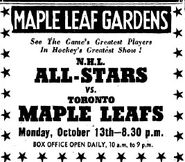 Highlights of the October 13, 1947 All-Star game which including a fight, Bill Mosienko's injury and goals by Max Bentley and the winner for the All-Stars by Doug Bentley.