Ice Hockey Wiki
Register
Don't have an account?
Sign In
Advertisement
in: Pages using a team bracket with deprecated syntax, ECHL seasons, 1999 in hockey, 2000 in hockey

The 1999-2000 ECHL season was the twelfth season of the ECHL. Before the start of the season, the Miami Matadors and Columbus Chill suspended operations, the Chesapeake Icebreakers, who originally suspended operations, moved to Jackson, MS. The league also welcomed expansion franchises in North Little Rock, AR and Trenton, NJ, a well as welcoming back a franchise in the former market of Greensboro, NC. The league also created a new individual award, the Plus Performer Award, to be awarded to the player who leads the league in plus-minus rating at the end of the regular season.[1] The Florida Everblades finished first overall in the regular season, winning the Brabham Cup and the Peoria Rivermen won their first Kelly Cup, defeating the Louisiana IceGators four games to two. 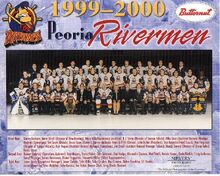