The Leafs had their second consecutive 45-win season, and broke the 1992-93 franchise record for most points in a season. Mats Sundin averaged a point per game, scoring 32 goals and picking up 41 assists for 73 points in 73 games. Jonas Hoglund had a career year, finishing third on the team in points with 56 (29 goals, 27 assists). Curtis Joseph set a Leafs record for wins in a season by a goaltender with 36. The Leafs put Steve Sullivan on waivers and on October 23, 1999 he was picked up by the Chicago Blackhawks. In early 2000, Wendel Clark returned to the Leafs for the third time and had a two goal game on February 1 in a 5-3 Leafs win at Tampa Bay. In March, the Leafs traded Mike Johnson to the Tampa Bay Lightning for Darcy Tucker.

The Leafs got off to a red-hot start to the season, winning 10 of their first 14 games with 4 shutouts. The team suffered a setback on December 4, 1999 in a home game against the Pittsburgh Penguins. Forward Yanic Perreault was coming around the Pittsburgh net with the puck when Penguins goaltender Tom Barrasso slashed Perreault with his goalie stick. Perreault suffered a broken arm and missed 23 games. Barrasso received a 4-game suspension. Another setback occurred on March 11 at Ottawa when Marian Hossa was attempting to clear the puck out of the centre-ice zone. Hossa swung his stick in a golf-swing motion and caught Toronto defenseman Bryan Berard in his right eye. Berard had to leave the game due to the injury and Hossa was assessed with a double minor for high-sticking. It was the last NHL game Berard would play for nearly a year and a half. To make matters more complex, Sergei Berezin, a 37-goal scorer in 1998-99 missed 21 games. He finished with a solid 26 goals. Despite losing these hindrances, the Leafs battled on, defeating 4 stellar teams between March 16 and April 1 (Detroit on March 16; New Jersey on March 25; St. Louis on March 29; and Washington on April 1). The Leafs finished 3rd in the Conference and 1st in the Northeast Division. Sundin led all skaters in overtime goals scored, with 4. 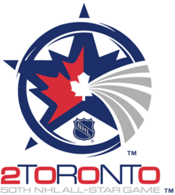 The all-star week festivities saw the Canadian Hockey League Top Prospects Game played on February 2, and an exhibition game between the Canadian and American women's national teams on February 3. The Heroes of Hockey game and the Skills Competition were held on February 5. It is to note that the opening face-off for the Heroes of Hockey game were Ted Lindsay and Fleming Mackell, two players who played in the 1st National Hockey League All-Star Game.

The week also was a good sendoff for Wayne Gretzky, who had retired the previous season. His #99 was raised to the rafters, despite him never playing for the hometown Toronto Maple Leafs, as a show of his number's league-wide retirement. Gretzky also made it clear that he would not partake in any oldtimer or Heroes of Hockey game unless it was held in Edmonton, a statement that was realized with the Heritage Classic three years later.

The Maple Leafs have been involved in the following transactions during the 1999-2000 season.

Retrieved from "https://icehockey.fandom.com/wiki/1999%E2%80%932000_Toronto_Maple_Leafs_season?oldid=128422"
Community content is available under CC-BY-SA unless otherwise noted.