The 1998 World Junior Ice Hockey Championships (1998 WJHC) were held in Helsinki and Hameenlinna, Finland. The championships began on December 25, 1997 and finished on January 3, 1998. Home team Finland was the winner, defeating Russia 2-1 in the gold medal game, thanks to the goaltending of Mika Noronen and the overtime heroics of Niklas Hagman. Switzerland defeated the Czech Republic 4-3 to capture the bronze medal.

Also worth noting was that Canada had its five year title streak broken with its worst placing to date (8th). Canada also suffered perhaps one of the most shocking losses in hockey history during the tournament, losing 6-3 at the hands of Kazakhstan. The Kazakhstanis were considered the "joke" of the tourney, using borrowed equipment from other teams for one game. Canada would miss out on gold seven years in a row before beginning their current streak of five straight championships. As of 2009, this tournament is the only one since 1992 in which Canada failed to medal.

Germany relegated to Pool B for 1999. 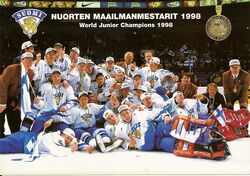 Finland
Add a photo to this gallery

Retrieved from "https://icehockey.fandom.com/wiki/1998_World_Junior_Ice_Hockey_Championships?oldid=272149"
Community content is available under CC-BY-SA unless otherwise noted.