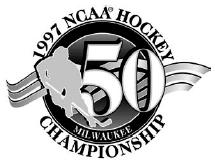 Boston University appeared in their fifth straight Frozen Four, their seventh in eight years, and their twentieth all-time.