Adler Mannheim became the DEL Champion for the second time in a row, winning a German title for the third time in their history. The season had it's share of instability. After the 15th regular season round, the Kaufbeurer Adler were insolvent and the Düsseldorfer EG left the league after season end.

As in the previous season two rounds/phases were played. In the first round, all teams played one home and one away game with each other for a total of 28 rounds. The first 6 placed teams continued playing for the playoff placements German: Meisterrunde). The 9 last placed teams had to fight it out for the last 2 playoff spots.

Two teams qualified for the playoff spots 7 and 8.

The first round of playoff qualifications was played as a best-of-five series.

The second round of playoff qualifications was played as a best-of-three series.

The Hannover Scorpions and Krefeld Pinguine qualified for the playoffs.

The playoffs were played in a best-of-five mode.

With the last game, the Adler Mannheim became repeat DEL Champion and won the German Champion title for the 3nd time in the club history. 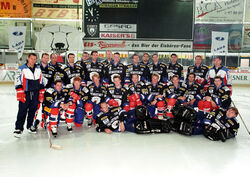