This is the 1996 tournament for the University Cup, the CIAU Canadian university championship. The semi final games were held at Varsity Arena and the final was played at the Maple Leaf Gardens. It was a 4-team single knockout format. The format remained until 1997. 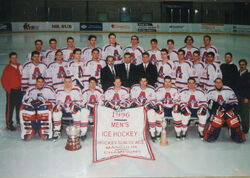 Acadia Axemen
Add a photo to this gallery

Retrieved from "https://icehockey.fandom.com/wiki/1996_University_Cup?oldid=547135"
Community content is available under CC-BY-SA unless otherwise noted.