The 1995 Men's World Ice Hockey Championships was played in Stockholm and Gavle Sweden, from April 23rd to May the 7th, 1995. In the tournament finals, Finland won the gold medal by winning over Sweden 4-1 at the Globen arena in Stockholm. The Finnish goals were scored by Timo Jutila and Ville Peltonen, who scored a hat trick.

The gold medal was the first in Finland's history. Sweden had written a fight song, "Den glider in", which also was intended to be the official song of the championships. After the finals, the song became very popular in Finland.[1][2]

Because the 1994-95 NHL lockout delayed the NHL season, many of the top professional players were not available. The Canadian and American teams would logically be hit the hardest, but the Americans found a way to lead their group in the first round. The Canadians, who struggled in the early tournament, beat the Americans in the quarter-finals, lost in overtime to the Swedes, and then beat the Czechs for the bronze. Andrew McKim, playing in the minors for the Adirondack Red Wings ended up being the tournament scoring leader.[3][4]

Switzerland was relegate to Group B.

Played in Bratislava, April 12-21. The hosts bettered their Group C record of the previous year, this time winning all their games. 38 year old Peter Stastny led the tournament in scoring.[3]

Played in Sofia March 20-26. Nine teams took part this year because Yugoslavia was given the right to return to the group that they had last played in as the Socialist Federal Republic of Yugoslavia. The consequence was that two teams were relegated.[3] They played in three groups of three where the first place teams contested promotion and the third place teams contested relegation. Two years after failing to qualify for Group C, Belarus got a rematch against Ukraine and Kazakhstan, this time coming out on top.

Belarus was promoted to Group B.

Both Yugoslavia and Bulgaria were relegated to group C2.

Played in Johannesburg March 21-30. Two groups of five played round robins where the top two from each contested promotion. The bottom five teams were relegated to qualification tournaments for 1996 Group D. Belgian player Joris Peusens was only fifteen years old.

Croatia only needed to tie Lithuania in their final game to earn promotion to Group C1, and they did so.

Israel, Australia, and South Africa, all were relegated to Group D qualification. 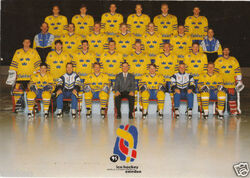