The 1995 Memorial Cup occurred May 13-May 21 at the Riverside Coliseum in Kamloops, British Columbia. Participating teams were the host Kamloops Blazers, who were also the champions of the Western Hockey League, as well as the WHL runner-up Brandon Wheat Kings, and the winners of the Quebec Major Junior Hockey League and Ontario Hockey League, which were the Hull Olympiques and the Detroit Jr. Red Wings. Kamloops won their second straight Memorial Cup, over Detroit. 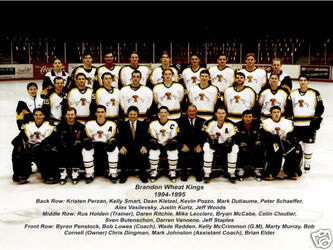