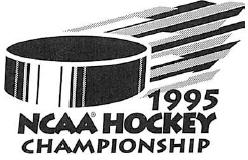 The 1995 Frozen Four was held March 30 and April 1, 1995 in Providence, Rhode Island at the Providence Civic Center.

Boston University won its first national title since 1978, defeating Maine in the first ever all-Hockey East final, 6-2. It was BU's fourth national championship.