The 1995 Calder Cup Playoffs of the American Hockey League began on April 12, 1995.[1] The twelve teams that qualified, four from each division, played best-of-7 series for division semifinals and division finals. The highest remaining seed received a bye for the third round while the other two remaining teams played a best-of-3 series series, with the winner advancing to play the bye-team in a best-of-7 series for the Calder Cup. The Calder Cup Final ended on May 26, 1995 with the Albany River Rats defeating the Fredericton Canadiens four games to zero to win the first Calder Cup in team history.[2] Albany's Corey Schwab and Mike Dunham were co-winners of the Jack A. Butterfield Trophy as AHL playoff co-MVPs.[3]

In each round the team that earned more points during the regular season receives home ice advantage, meaning they receive the "extra" game on home-ice if the series reaches the maximum number of games. For the Calder Cup Semifinal round, the team that earned the most points during the regular season out of the three remaining teams receives a bye directly to the Calder Cup Final. There is no set series format due to arena scheduling conflicts and travel considerations. [6]

Note 1: Home team is listed first.
Note 2: The number of overtime periods played (where applicable) is not specified

(A2) St. John's Maple Leafs vs. (A3) Fredericton Canadiens Edit

(A1) Prince Edward Island Senators vs. (A3) Fredericton CanadiensEdit 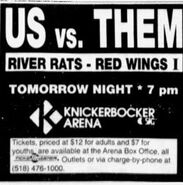 Albany
Add a photo to this gallery

Retrieved from "https://icehockey.fandom.com/wiki/1995_Calder_Cup_Playoffs?oldid=399928"
Community content is available under CC-BY-SA unless otherwise noted.