The 1994 IIHF World Women Championships was held April 11-April 17, 1994 at the Herb Brooks Arena in Lake Placid, New York in the United States. The Team Canada won their 3rd consecutive gold medal at the World Championships defeating the United States in a repeat of the previous two finals. Finland picked up their 3rd consecutive bronze medal, with a win over Semi-Final debutants, China.

The tournament was held between eight teams. Canada and the United States as the top two ranked teams received automatic qualification for the tournament. In addition, the top five teams from the 1993 European Championship would be joined by the winner of the 1994 Asian Qualification Tournament.

The eight participating teams were divided up into two seeded groups as below. The teams played each other once in a single round robin format. The top two teams from the group proceeded to the Final Round, while the remaining teams played in the Consolation Round. 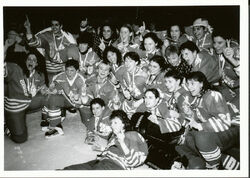